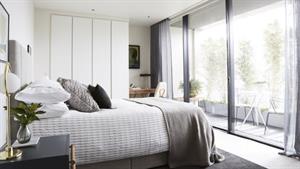 Buyers of a four-bedroom family home in London need deep pockets - but perhaps not as cavernous as a year ago.
Asking prices in the capital for these top-of-the-ladder properties fell by 8.7% over the past year, according to search site Rightmove. House prices grew much faster in eastern England and the West Midlands than in London, according to Zoopla.
London's annual house price growth for 2016 (3.7%) was below the UK average of 4.5% for the first time since 2008, the Nationwide Building Society says.
So has the London bubble burst? Are bargains to be had? Well, these things are relative.
One new development in Radstock Street in Battersea will see eight large apartments go on the market in February for £3.65m each.
For most people around the UK, that is an eye-watering price for a three-bedroom property. Yet, the developers say these homes will be attractive to downsizers - people aged in their 50s and 60s already owning a home in central London.
The idea of downsizing to a £3m-plus home might make those eyes water a little more, but Louisa Brodie, head of search at Banda Property, says these apartments are "realistically priced".
"They have car parking, a porter, and are brand new. Properties like this are rare to find, and areas like this have a unique selling point," she says. "London is still one of the most desirable places to live, anywhere."
Image copyright Banda Property Image caption Radstock Street is expected to attract interest
This is surely a sign that London property has been decoupled from the rest of the country for many years.
Despite the drop in activity in London, the average house price in the capital is still £474,000, more than double the typical price of £217,000 in the UK as a whole, according to the latest official figures from the Office for National Statistics (ONS).
The slowdown in central London is the result of the most significant change in the housing market in 2016 - a stamp duty surcharge on buy-to-let and second homes.
Since April, anyone buying a home that is not their main residence has had to pay a 3% stamp duty surcharge. This meant that, for second homes or buy-to-let properties, the rate for properties priced at more than £1.5m reaches 15%.
Stamp Duty Bands
Price band Standard rate Buy-to-Let/Second home
Up to £125,000 0% 3%
£125,001 to £250,000 2% 5%
£250,001 to £925,000 5% 8%
£925,001 to £1.5m 10% 13%
£1.5m+ 12% 15%
Source: HMRC
The surcharge led to a burst of activity in March followed by a steep drop in transactions in April - a "hangover" that still persists, according to Simon Rubinsohn, chief economist at the Royal Institution of Chartered Surveyors (Rics).
In Scotland, the equivalent tax - the Land and Buildings Transaction Tax (LBTT) - was also up-rated.
Price changes
The new surcharge, alongside a rise in normal stamp duty costs for £1m-plus homes since 2014, had a bigger impact on the market than the Brexit vote in June, according to experts.
Ray Boulger, of John Charcol mortgage brokers, says it led to many at the expensive end of the market choosing to extend their homes rather than move. This made it more difficult to create chains lower down the market.
Ed Stansfield, chief property economist at Capital Economics, says the housing market recovered "remarkably quickly" after cooling immediately after the UK's vote to leave the EU.
He says a "degree of nerves" surrounding the economy and potential buyers' caution over stretching too far financially had kept a lid on house prices.
Image copyright PA
Another major factor in the market over the last 12 months, according to the experts, is a lack of homes going on to the market. This supply squeeze has meant that, despite all the other pressures on affordability, prices continued to increase.
The constraint on supply proved to be more problematic than expected, according to Mr Rubinsohn of Rics, whose prediction of a 6% rise in house prices for 2016 looks to be the most accurate.
This trend will continue, he says, spelling more difficulties for first-time buyers whose incomes may fall in real terms. Many will continue to rely on the Bank of Mum and Dad for help with raising a mortgage deposit, while others will look to the government's Help to Buy projects to find somewhere affordable.
UK house price forecasts for 2017
Commentator Forecast
Henry Pryor, property commentator 4% fall
Ed Stansfield, Capital Economics 2% rise
Ray Boulger, John Charcol mortgage brokers 1% rise
Simon Rubinsohn, Rics 3% rise
Robert Gardner, Nationwide building society 2% rise
Martin Ellis, Halifax 1% to 4% rise
Others see first-time buyers as key to the buoyancy of the housing market.
"First-time buyers still underpin the wider market. So long as the government continues to support them either directly via Help to Buy or by further tax changes then the market should not plunge but this is not completely in the gift of politicians who frankly have more pressing matters to attend to," says property buying agent Henry Pryor.
"Like last year if you already own a home then you are probably better off than someone who doesn't. If you don't, then it seems unlikely that 2017 will see a swift solution emerge."
The experts have a relatively wide spread of predictions for 2017 - from price falls overall to rises matching or outstripping the general level of inflation.
Martin Ellis, housing economist at mortgage lender the Halifax, is offering a hedge-your-bets prediction of between a 1% and 4% rise.
"The relatively wide range for the forecast reflects the higher-than-normal degree of uncertainty regarding the prospects for the UK economy next year," he says.
Given that a buying a home is the biggest financial transaction of most people's lives, they - and their mortgage lender - will want some certainty over their job and income before taking the plunge.
________________________________________